Many years ago, while sailing the Inside Passage along the coast of Alaska one summer, I was struck full force by the “majesty” of this world in which we live.

Witnessing the sheer magnitude of the beauty that surrounded me took my breath away – and I instantly realized the pure “poetry” of it all…
Then I began reading the poems of Robert W. Service

It seemed as if Service’s words were somehow plucked directly from the environment in which I’d found myself. His phrases were describing all the wondrous manifestations of nature that I was experiencing – exactly as they were – in all their glory! When I read his poem “The Three Voices” I knew at once he had been standing in virtually the exact same spot one hundred years earlier: seeing, hearing & feeling the very same eternal qualities of “life” that I was. And he was struck by them in exactly the same way.

His descriptions of the waves, the stars, the wind, people with their quirky behavior and the other exposed truths of life that confronted him as he explored his surroundings – they all resonated deeply with me. He crafted poetic tales that were both humorous and deep with insight at the same time. He observed the human condition and commented through his poetry on that stark but colorful part of world in the northwest corner of our American continent as it was around the turn of 19th century.

There was a universality to his perspective – easily grasped by millions, even if they’d never been to Alaska in the days of the Gold Rush. His life took many turns, but it was here where he produced much of his best work.
I was captivated by his turn of phrase – fell in love with his colorful word-paintings of all that made life in those days larger than it appeared.

The music I wrote came effortlessly at first: the melodies simply began appear as I read each verse, accompanying the words instantaneously as I was reciting them. And I wasn’t the first to do this – others have set his poems to music – even the Beatles used one of his works as an inspirational jumping-off point for one of their songs.

There was a rhythm and rhyme to his poetry that flowed effortless in whatever direction his thoughts took.

With some continued effort on my part, I was able to spin many a piece of musical fabric that hang so comfortably on his every word.

[ see his poem: “Your Poem” for some spooky insight into our “collaborations ]

Mostly because of this, it often feels as if if I am simply hearing music that he had written directly into each line – each turn of phrase turning into the perfectly obvious harmony and melody that could only accompany that poem.

I am still uncovering new gems and have yet to complete many of the ones begun over the last 10 years.

Hopefully a second CD of “ours” will see the light of day and be available for your listening pleasure sometime soon.

Pick up any book of Robert Service’s poetry and be prepare to be amazed at his wit & wisdom, and his use of words to paint some extraordinary musical pictures.

“My poem may be yours indeed, in melody and tone
If in it’s rhythm you can weave a music of your own…”

Karen Drucker Band
A Love Complete
You’re the One for Me
TUCKER: The Man and His Dream (Music from Francis Ford Coppola’s film – A/P)
Shenandoah (with Jerry Garcia/David Grisman)

Listen to the Music Play 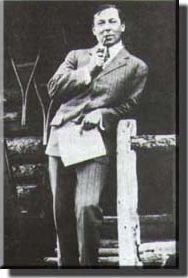 Robert Service composed these words around the turn of the last century… Now, at the turn of this century, John Rosenberg has given them “melody and tone”, and a voice that lifts them clear off the pages.

My poem may be yours indeed, in melody and tone…
If in its rhythm you can read
A music of your own;
If in its pale woof you can weave
Your lovelier design
‘Twill make my lyric, I believe, more yours than mine.

I’m but a prompter at the best; crude cues are all I give.
In simple stanzas I suggest-
‘Tis you who make them live.
My bit of rhyme is but a frame,
And if my lines you quote,
I think, although they bear my name, ‘Tis you who wrote.

Yours is the beauty that you see in any words I sing;
The magic and the melody
‘Tis you, dear friend, who bring.
Yea, by the glory… Yea, by the gleam
The loveliness that lures
Your thought to starry heights of dream.
The Poem’s yours